Trip hazards are an eyesore, and more importantly, they are a liability issue that needs to be addressed as soon as they appear. There are a variety of ways to remedy the danger. A few of the most common are to remove and replace (the most expensive), grind the higher side down to the level of the lower side (damages the concrete, likely causing future failure), or fill the lower side to the elevation of the high side (most economical). flexKRETE is the perfect material for this type of repair. With flexKRETE’s ability to be placed at any depth and then troweled out to a feathered edge is unmatched. Any cement-based product will eventually fail. It will start to develop cracks, and the thinner areas will begin to “flake up” and pop out. This will not happen with flexKRETE.

FLEXKITs are designed to make the repair of damaged concrete structures an easy, simple procedure. FLEXKITs contain all materials, which are self-contained, and premeasured. 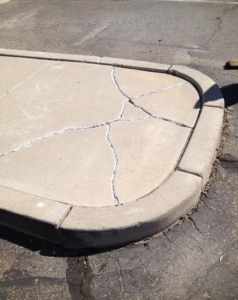 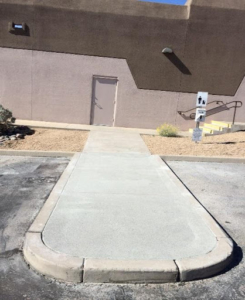 The entire slab, within the curb, had sunk as much as one inch, but the curb had not moved. A handheld grinder with a masonry disc was used to widen the cracks, and the entire area was swept clean of all dirt and debris. The cracks were primed with flexPRIME. A thin layer was brushed on with a 2” chip brush. Once the primer had become tacky like duct tape, the flexKRETE was prepared. A mixture of 3:1 (3 parts sand to 1 part flexKRETE) was troweled into the cracks and allowed to cure. Duct tape was then placed one foot in from the curb as a guide, then primer was applied between the tape and the curb and allowed to “tack up.” The next step was to mix more flexKRETE (at a 3:1 ratio) and trowel it in between the tape and the back of the curb. The tape was immediately removed. This process eliminated the trip hazard by forming a gradual slope from the back of the curb to the sunken slab. The remainder of the slab was treated to a broadcast to blend and cover the cracks and other blemishes in the slab. flexKRETE was mixed without sand and a ⅜” nap paint roller was used to spread the catalyzed flexKRETE over the entire slab, then sand was broadcasted, to refusal, over the wetted area. Once cured, the excess sand was vacuumed up. The entire process took two men 3½ hours to complete.

Remember, “Fix It with FlexKrete and Forget About It.”

Want to join the discussion?
Feel free to contribute!

flexKRETE Columns
Scroll to top NOTE: I added Sharpspring tracking code to the functions.php file. I starts on line 40 of the enfold-child>functions.php file and looks like this: /** * Load the SharpSpring site tracking script * into the of the WordPress site */ function load_sharpspring_tracking() { ?>