These are before and after pictures of one of four columns that support a slide structure at a local North Las Vegas swimming pool. The before picture clearly shows the extent of the damages caused by the chemicals in the pool water. These chemicals attacked the concrete, as well as the rebar, causing extensive damage and compromising the integrity of the column.

With the fast approaching swim season, repairs needed to be made quickly. The City had heard of flexKRETE’s superior compression strength and fast cure rate and felt flexKRETE was the way to go. The City contacted Terra Contracting, one of flexKRETE’s certified installers, to make repairs on the columns. 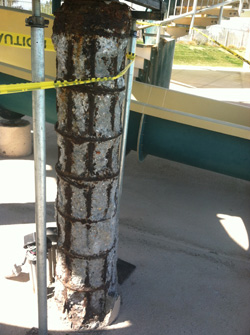 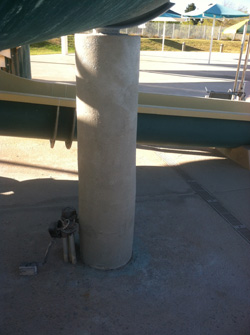 Screw jacks were fabricated and installed to support the weight of the structure during the repair. The 4 columns were then covered with a coat of flexPRIME to ready the concrete for the flexKRETE application. The primer also sealed the rebar. which cuts off the oxygen, thereby keeping it from further deterioration caused by the rust. An 18-inch tall section of sauna tube was used as a form. A cut up the length of the tube was needed to allow the tube to be opened up and placed around the column. Once in place a ratchet strap was used to secure the tube. The flexKRETE was mixed at a 3:1 ratio (3 sand to 1 flexKRETE) and flexTEMP was added to speed up the curing process. The mixture was packed into the form, vibrated and allowed to harden. It took no more than 10 minutes for the mixture to harden, and the form was removed and slipped up 12 inches and the process continued. It took two men less than a day and a half to complete 4 columns and resurface 22 stairs. The flexKRETE will not succumb to the same forces that caused the concrete to deteriorate, as it forms a waterproof barrier that is impervious to water, chlorine, muriatic acid or any other chemicals found in pool water. The repair is structural, the cost was minimal, the repair was quick and the customer is pleased.

Remember, “Fix It with FlexKrete and Forget About It.”

Want to join the discussion?
Feel free to contribute!